It’s safe to say that Virginia’s 2019 General Assembly session will largely be remembered for the scandals that extended far beyond Capitol Square. Issues of race, sexual assault, and abortion access have put Virginia’s lawmakers and policy leaders at the center of ongoing nation-wide conversations on harm, healing, and those social and health policy issues that shape our communities. In case you missed it, the Action Alliance has released several statements, calling on advocates and social justice allies to address the injurious legacy of racism and white supremacy in Virginia and to seize these public conversations on sexual violence and harm as opportunities to ground ourselves in a collective mission of building a culture of consent and disentangling our accountability processes from that of the criminal justice system.

Despite the political scandals having marred this session, lawmakers did pass notable measures on topics ranging from consent education to electoral access and environmental justice. The following is a run-down of some of those measures that impact the sexual and domestic violence field directly and others that promote the world that the Action Alliance and our member-agencies are committed to building together. Please note, for information on specific bills that the Action Alliance supported and opposed this session, see the 2019 General Assembly Report.

ANIMAL CRUELTY IN THE CONTEXT OF DOMESTIC VIOLENCE

Two bills were introduced this session that would have recognized violations related to animal cruelty carried out with the intent to threaten, intimidate, coerce, harass, or terrorize an intimate partner. These bills were incorporated into another bill – referred to by animal rights activists as “Tommie’s Law” – which creates a Class 6 felony penalty for cruelly or unnecessarily beating, maiming, mutilating, or killing an animal.

While a major focus of the 2018 session was reaching bipartisan consensus on modest increases to Virginia’s larceny threshold, criminal justice reform measures this year were largely put on the backburner. Measures to support data transparency with regards to Virginia’s pretrial detention/cash bail system were quickly defeated in both the House and Senate, in addition to broadening both discretionary parole for juvenile offenders and expungement for certain offenders. Meanwhile, the General Assembly moved to require the Department of Corrections begin reporting population statistics of those incarcerated in state correctional institutions, including making statistics available on offenders placed in and released from restrictive housing and Shared Allied Management Units.

Legislators approved measures to require Virginia’s high school family life education (FLE) curriculum to incorporate programs on the law and meaning of consent. Under current law, such elements are permissive in any high school FLE curriculum and those school districts that teach this content most effectively do so by partnering with their local sexual and domestic violence agencies.

Every session, there are dozens of bills filed that would have negative impacts on child custody and visitation proceedings/outcomes for survivors who are parents. This year was no different. The Action Alliance spent a significant amount of energy working with allied advocacy agencies and bill patrons alike to prevent the introduction of a set of vague and inconsistent definitions of domestic abuse into the best interests of the child custody factors. Another measure introduced and thankfully defeated would have created an “equal or maximized parenting time” presumption clause in the best interests of the child custody factors – providing judges with the direction to consider maximizing parent-child time in cases “where appropriate”.

While a large majority of this year’s measures to increase poll access, promote campaign transparency, and lift voting restrictions were dead on arrival, the legislature did pass no-excuse absentee voting. The passed legislation creates a seven-day window before an election in which voters can cast ballots in person without having to give an excuse. Enactment of this legislation will not go into effect until the 2020 election.

The General Assembly backed bipartisan legislation to hold Dominion Energy accountable for cleaning up toxic coal ash (a byproduct of burning coal). The legislation will soon be signed by the governor and will require the complete excavation of more than 28 million tons of toxic coal ash that Dominion currently stores at Chesterfield Power Station, Chesapeake Energy Center, Possum Point Power Station, and Bremo Power Station. This will help to protect the clean water and the health of families that live near these coal ash ponds. For more on environmental justice measures introduced this session, see the Virginia Interfaith Center for Public Policy’s recap here.

Virginia did not become the 38th state to ratify the ERA. The Senate passed a ratification measure, but it was defeated in a House Privileges and Elections Subcommittee chaired by Delegate Margaret Ransone. A procedural move aimed at bringing the ratification measure to the House floor, championed by Delegate Hala Ayala, was both hotly debated and narrowly defeated late in the session. 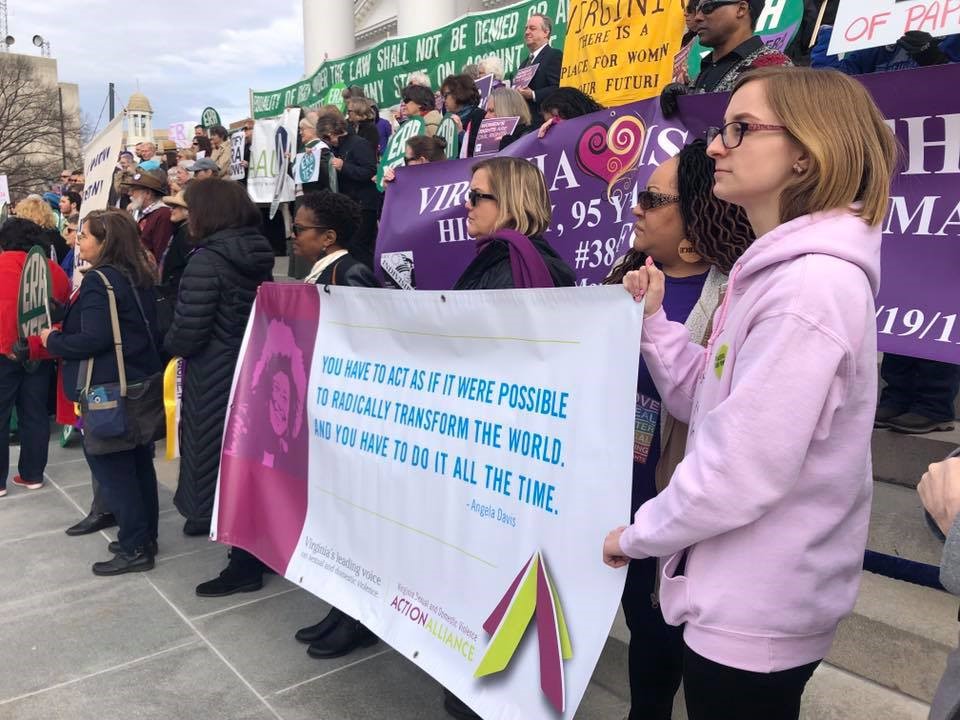 This session – like in sessions past – nearly every significant measure seeking to reduce offender access to firearms, prevent intimate partner homicide, and keep communities safe was blocked by the House and Senate. Including several bills that would have expanded firearm prohibitions to permanent protective orders, applied penalties for non-compliance with firearm surrender/seizure processes, provided communities with guidance on firearm surrender/seizure when necessary, and established emergency risk protection orders in an effort to increase bystander capacity to recognize and respond to red flags for escalating and lethal violence in communities.

A package of bills aimed at reducing the likelihood of an eviction among low-income Virginians – the product of policy recommendations from the Virginia Housing Commission – has been cleared by the Virginia legislature and signed by the Governor. Virginia localities, including Richmond and the Hampton Roads area, have some of the highest eviction rates in the nation and the Governor has made expanding access to affordable housing a priority of his administration. These efforts certainly support survivors who often find themselves facing financial and housing instability as a direct result of the violence they’ve experienced.

The legislature blocked measures to grant immigrant communities access to driver-privilege cards, in-state tuition for DACA eligible students, and other legislation that would have supported connected and thriving communities. Most concerning is that the final state budget approved by the House and Senate eliminated funding for Census outreach in the Commonwealth, a move that will undermine a fair and accurate count of Virginians.

The House and Senate passed resolutions in which the General Assembly acknowledges “with profound regret the existence and acceptance of lynching within the Commonwealth” and calls for reconciliation among all Virginians. To this end, there were a number of impassioned floor speeches and testimonies provided by Delegates and Senators alike this session. In case you missed it, here is Delegate Jay Jones’ speech on the deep impact of racism in Virginia, promoting healing, and working to bridge racial divides and unify our Commonwealth.

Every session, there are dozens of proposed changes made to protective order (PO) statutes. In 2019, legislators agreed on several changes/updates to the process. One bill clarifies that if a court is lawfully closed and a full hearing for a preliminary protective order cannot be held within 15 days of the issuance, the hearing will be held on the next day that courts are open. Another change to current PO statutes requires any elementary or secondary school principle – who has an enrolled student for which a judge, court, or magistrate has issued a protective order for the protection of the child – to notify school personnel/educators who would have legitimate interest in such information that an order has been issued. This legislation also requires Virginia Board of Education to establish guidelines and develop model policies to aid school boards in the implementation of such notification. Finally, another bill requires that when a preliminary protective order is issued in an ex parte hearing where the petition for the order is not supported by an affidavit, the court issuing the order state the basis of the order including a summary of the allegations made and the court’s findings.

After several judicial interventions and over a year of pressure placed on Virginia’s lawmakers, a deal was struck to create a 16-member redistricting commission that would redraw the state’s legislative and congressional district boundaries, with a focus on correcting racial gerrymandering, after the 2020 census.

Unfortunately, all of our priority bills (and those championed by our policy partners) were defeated this session. Including measures to expand the Family Medical Leave Act, repealing Virginia’s burdensome TRAP restrictions, as well as removing medically-unnecessary requirements currently placed upon Virginians seeking abortion care, enshrining access to birth control and bodily autonomy in our code, expanding ACA provisions for no-copay insurance coverage to include a broader host of reproductive health care services, and more.

A special committee on school/public safety convened shortly after last year’s deadly school shooting in Parkland, FL and produced a list of significant policy recommendations for Virginia’s legislators going into the 2019 session. Some of these recommendations, including changes to training for administrators and improving Virginia’s student-to-counselor ratio, passed the legislature.

Three notable measures backed by the General Assembly this session will serve to provide sexual assault survivors with greater access to services and protection while supporting coordinated community responses to these issues. One bill directs the Virginia Crime Commission to study statewide access to forensic nurse examiners with a focus on recommendations for improving access statewide. Another bill removes Sexual Assault Response Teams and Multidisciplinary Child Sexual Abuse Teams from the list of those public entities subject to Freedom of Information Act (FOIA) requests. And finally, new legislation will prohibit employers from requiring employees to execute or renew any provision in a nondisclosure or confidentiality agreement that has the purpose or effect of concealing claims of sexual assault.

While advocates during the 2018 session were largely successful in setting the stage for significant advances with regards to dismantling the trauma to prison pipeline in Virginia, legislators struck down most reasonable policy advancements on these issues in 2019. Measures to protect students from being charged with “disorderly conduct,” which is a misdemeanor and can come with a fine of up to $2,500 and up to a year in jail, were blocked this session.

For information on specific bills, including those that the Action Alliance supported and opposed this session, see our 2019 General Assembly Report.

Jonathan Yglesias is the Policy Director at the Virginia Sexual & Domestic Violence Action Alliance where he works with a team of advocates, movement minds, attorneys, and passionate policy nerds to coordinate the Action Alliance’s public policy efforts on behalf of survivors, sexual and domestic violence agencies, and communities in Virginia seeking to improve the prevention of and response to sexual and domestic violence.